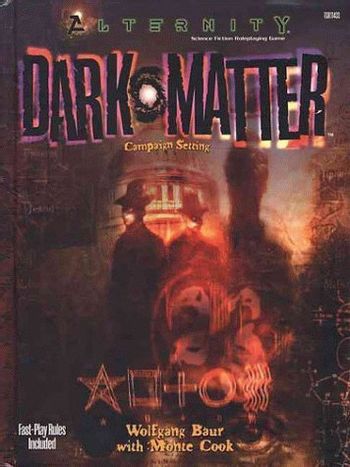 The Dark Matter setting, also called Dark•Matternote Following the pattern set by the Star*Drive setting using punctuation in the middle of its title., was first published in 1999 for TSR's Alternity RPG, then recycled for its d20 Modern RPG. This is a world where every lunatic conspiracy theory is true. There really are psychic grey aliens abducting humans and mutilating cattle. Illuminati type groups really are working to bring the entire world under their control. Bigfoot? He's out there too. And The Government is covering it all up. The players are field agents for the shadowy private organization known as the Hoffmann Institute, devoted to investigating the activities of psychics, cultists, and "xenoforms" and protecting humankind from the tide of dark matter seeping into the fabric of the universe that's the ultimate cause of all things paranormal.