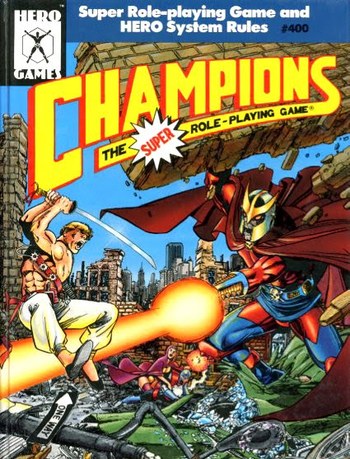 Along with Villains & Vigilantes, this groundbreaking game published by Hero Games essentially created the genre of Super Hero roleplaying in the early 1980s, and it lasted much longer than many of its contemporaries, with Hero Games releasing a new edition of the core rules in early 2010.

In addition to spearheading support for an entire genre, Champions has also been influential as the first and most well-developed Tabletop Game to use point-based character creation, allowing players to precisely define their characters using a budget of points which were spent on powers and attributes whose costs were play-balanced against each other. It specifically introduced the concept of acquiring character flaws in order to gain extra points. It was also one of the first RPGs to do away with character classes and character levels. These innovations heralded what is sometimes called the Second Generation of RPG design; most modern roleplaying games use a variation of character points in defining their characters (Steve Jackson of Steve Jackson Games specifically credits Champions for shaping and guiding his thoughts when he began developing GURPS). Champions itself went on to become the skeleton to two other universal systems by the end of the 1990s: the HERO System, and Fuzion.

By the middle 1990s, Champions faced a fair amount of competition in its genre — while V&V seemed to have faded (mostly) into obscurity, there were other challengers: Mayfair Games' DC Heroes and TSR's Marvel Super Heroes were both licensed properties which allowed players to run familiar comic book characters, and GURPS Supers was already in its second edition, as was Palladium's Heroes Unlimited. In 2001, a group of investors led by Dark Champions developer Steven Long bought out the rights to the game and published a fifth edition of the Hero rules, which remains in print as of 2009. A sixth edition of the rules was released at GenCon in August 2009. While many earlier games have fallen by the wayside, Champions continues to thrive, and continues to inspire new games, like White Wolf's Aberrant.

A Kickstarter campaign was held in 2020

to fund Champions Now, a take on 1st to 3rd edition Champions.

The intellectual property rights to the Champions setting are now held by Cryptic Studios, the original developers of the MMORPG City of Heroes. They bought the setting outright rather than licensing it, and it is now used as the setting of their new game, Champions Online. The IP is licensed back to the original developers (who still own the underlying Hero System) for the pen-and-paper game. (Cryptic themselves are now owned by Perfect World Enterprises.)

Also, in 2008, Hero Games brought out a licensed supplement for the PS238 setting. It contains a simplified version of the Hero System rules for players just starting to use Hero System.

The Hero System, and the Champions Universe provides examples of the following tropes: