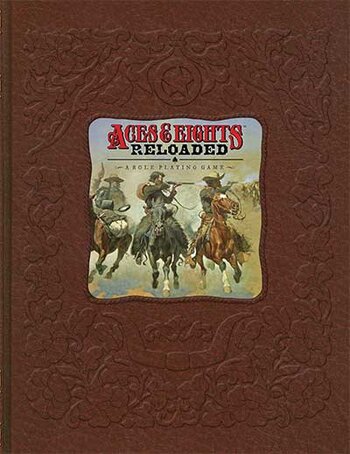 Aces and Eights: Shattered Frontiers is an Old West-themed tabletop RPG released in 2007 by Kenzer and Company. The focus of the game, unlike earlier efforts like TSR's Boot Hill or the horror motif of Deadlands, is on Wide-Open Sandbox play: specialized rules are provided for gambling, prospecting, brawling, chases, cattle drives and so forth, but the game provides the tools to create virtually any nineteenth-century character concept and allow the game master to create almost any style of The Western. The hit-location system is particularly innovative and noteworthy; it uses target silhouettes and a bullseye transparency to allow the attacker to aim anywhere he likes: dice and playing cards then determine the amount, and direction, of deviation. The game also uses 'the Count' rather than initiative, a simultaneous-action system that takes quite a bit of bookkeeping but allows total player freedom during combat.

Obviously, heavy use of western tropes should be expected.

Aces and Eights makes use of the following tropes: