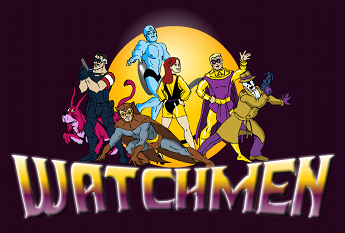 Watchmen was created by Alan Moore, Dave Gibbons, and John Higgins in the mid-1980s. Both commercially and critically successful, it is considered to have been a critical factor in The Dark Age of Comic Books.
Advertisement:

Then, in 1989, an animated series was released by Happy Harry Cartoons. Running one season of 13 episodes, it was considerably Lighter and Softer so as to appeal to the target demographic. It was mostly forgotten until the Theme Tune Roll Call was uploaded to Youtube

and Newgrounds in 2009; the song became a viral video, and the series became a Cult Classic, primarily due to the series being by and large So Bad, It's Good with the occasional surprisingly well-written moment.

Oddly enough, Alan Moore loves this series despite the Adaptation Decay and declared it the best adaptation of any of his works.

There isn’t actually a whole Watchmen Cartoon, just a parody opening and theme song. Though, Alan Moore and Dave Gibbons have seen it and enjoyed it.