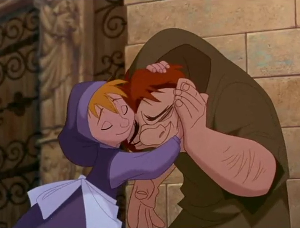 "Cause I still believe in miracles, I swear I've seen a few / And the time will surely come when you can see my point of view
I believe in second chances and that's why / I believe in you!"
— "Pollyanna

There are certain moments in popular culture that feel so right, where something happens in stories that feels so good and so appropriate in the story, that you can't help but be moved by it.

These could include a character helping another when it was especially needed, or when a villain finally has a real change of heart in response to the earnest efforts of the hero.

That is where the Heartwarming Moments come in, when the writers actually pull off a glowing scene that makes the whole audience say, against their better judgment, "Awww".

This trope can have massive overlap with Squee, when the moment is aimed at fulfilling the (mostly sexually or romantically oriented) wishes of the fanbase. And what may be heartwarming for one may be more of a case of Sweetness Aversion for another, since opinions may vary vastly on a highly subjective trope like this one. A failed attempt at creating a heartwarming moment can result in Narm if the producers muck it up. To create a genuinely heartwarming moment is a lot harder than it seems without plunging into sentimentality.

"We Are All Simply Ninja!"

Gaara rallies the disparate ninja of the world, uniting them against a common foe for the sake of the Leaf Ninja who saved his soul.

"We Are All Simply Ninja!"

Gaara rallies the disparate ninja of the world, uniting them against a common foe for the sake of the Leaf Ninja who saved his soul.