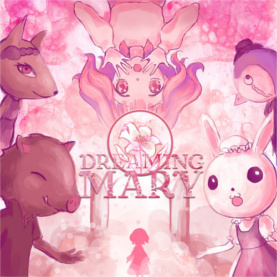 Many lovely shades of pink!
Advertisement:

is a sidescrolling adventure game made by Accha (a first-time game maker) with RPG Maker VX Ace Lite in April 2014. RPG Maker describes it thusly:

"Mary is a girl who loves to dream. In fact, she loves to dream so much she can spend an entire day dreaming. One day, when she falls asleep, she finds herself in a nostalgic place very different from her other dreams. Everyone there knows her and treats her like an old friend, and they invite her to play with them or help them. When she finishes all of their tasks, she is invited deeper into the dream."

The sequel, Blue Dreams, was scheduled for release in 2017

, but no new information of the game has surfaced since then.