Shout Out / The Ministry of Time 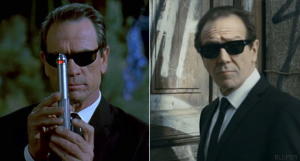 Maybe a figment of your imagination or maybe not.
Advertisement: