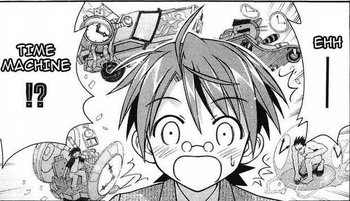 Guess That Shout-Out! note Back to the Future, Doraemon, The Time Machine and Terminator all in one Imagine Spot!
Advertisement:

The writer researches like mad, the characters are Genre Savvy and the series itself is positively Troperiffic and Trope Overdosed. Is it any wonder it has so many?