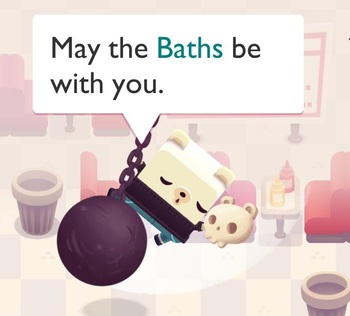 A triple shout-out combo - props by Shakespeare, dialogue by Star Wars, and pose reminiscent of a certain wrecking ball...

Alphabear 2 is chock full of references to famous films, literature, and pop-culture:

Items for customizing a player's avatar available in the clothing shop include reference famous characters and pop culture images:

The game generates cards after each game that incorporate words the player has spelled out in the previous round. These words appear in a mad-libs style text bubble over over the player's customized avatar, which appears in a randomly generated selected pose with randomly generated props. Some of the text, props, and poses contain shout outs to pop culture moments or literary references: