Series / You Are My Destiny 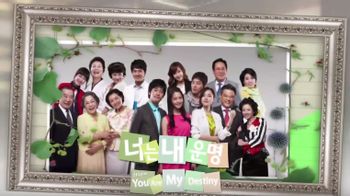 You Are My Destiny (너는 내 운명 Neoneun Nae Unmyeong) is an award-winningnote won 7 awards, 5 of which belong directly to Yoona South Korean TV drama that ran from May 2008 to January 2009 on the Korean Broadcasting System. It famously has Girls' Generation member Im Yoona in her first star acting role.

The story revolves around Jang Saebyeok, an orphaned milk-delivering girl who always tries to think positively after losing her eyesight in a Noodle Incident that happened several years prior to the story's beginning, after which she received a corneal transplant, her donor being a girl her age named Nayeong that died in a car accident.

As Saebyeok meets and grows closer to Nayeong's family, she searches for meaning in life, trying to piece together her past while also falling into a Love Dodecahedron that brings together various families in love, pain and strife.

Between November 2014 and April 2015, all 178 episodes of the series were uploaded to the KBS World TV channel on YouTube

Tropes contained in this series:

See you next time...