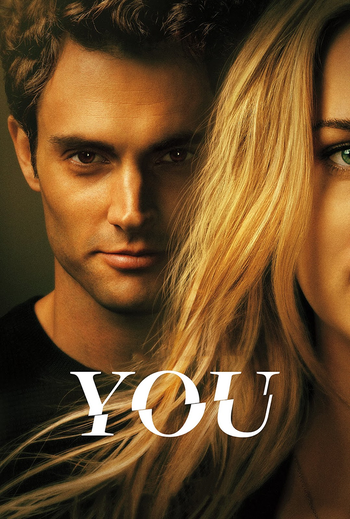 "At the end of the day, people really are just disappointing, aren't they?"
"I should have seen the signs. But you never do when you're in love."
Advertisement:

You is a psychological thriller series developed by Sera Gamble (Supernatural, The Magicians) and Greg Berlanti, based on the novel of the same name by Caroline Kepnes.

Joe Goldberg (Penn Badgley) seems like a perfectly normal bookstore manager on the surface, but when he meets Beck (Elizabeth Lail), a graduate student and aspiring writer, it soon becomes clear that all is not well with him. As his crush on Beck escalates to an actual relationship, Joe becomes increasingly more intent on keeping her around, by any means necessary.

You originally aired on Lifetime in late 2018, but it was later announced that the series would be moving to Netflix for its second season. The second season dropped in December 2019, adapting the source material's sequel, Hidden Bodies. A third season launched in October 2021, with a fourth greenlit before the third's premiere. After sticking to the broad plots of the first two novels for the first two seasons, the third season of the series departs completely from the narrative of the books and bears no resemblance to the third novel, You Love Me.

Not to be confused with the 2013 novel of the same name.

You contains examples of:

What if you're not the one? No, now is not the time to abandon principles. I have to believe love conquers all. And if you love me, it's only a matter of time...