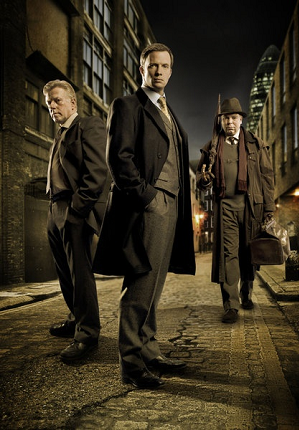 "Congratulations, you were right. Now all you have to do is solve the unsolvable and catch the most famous serial killer that ever lived. Good luck."
— Miles
Advertisement:

The first series, broadcast in 2009, concerned DI Joseph Chandler (Penry-Jones), a young, inexperienced, and overpromoted detective, who is sent to lead a squad of veteran homicide detectives in the London district of Whitechapel. As soon as he gets there, he is thrown into a murder investigation where a serial killer is re-creating the Ripper murders. Chandler now not only has to solve the most famous unsolved crime in history, but also has to work against his Old-Fashioned Copper department, who resent Chandler for being a "paper policeman".

The second series concerned a new series of copycat killings, based on the murders committed by the infamous London gangsters Reggie and Ronnie Kray. However, what seems like another copycat killing turns into something much worse when, Chandler and his men discover it's part of a plot by Ronnie's alleged sons, Jimmy and Johnny, to take over London's crime.

The third series, broadcast in early 2012, sees a change in format. Instead of dealing with copycat murders the team are now using historical precedent to help inform their investigations.

A fourth series started airing on 4th September 2013, with two episodes written by Steve Pemberton (who plays Ed Buchan). ITV has concluded the series after the last episode was aired in Britain.