Series / When A Man Loves 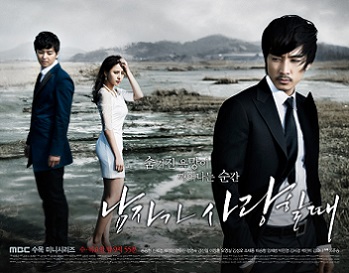 When A Man Loves (in Korean, 남자가 사랑할 때) is a 20-episode 2013 Korean Drama aired on the MBC network. Han Tae-sang is a thug and part of a loan shark gang. Meeting a plucky high school student during one of his shakedowns, he reforms, and seven years, later, is a successful financier. He bumps into Seo Mi-do again, and tries to prove he is a better person and worthy of her love. However, other evils rise from the past: Gu Yong-gap, a former gang peer who harbors deep hatred for our hero; his former boss' Gangster Moll Baek Seon-joo, who has wanted Tae-sang for almost a decade. There is also Lee Jae-hee, the cute younger brother of Chang-hee (who is in prison). Jae-hee also feels attraction to Seo Mi-do. The series aired 2013 summer.