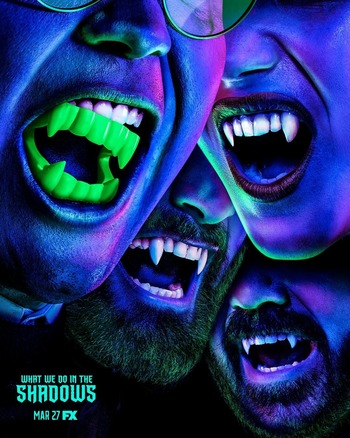 What We Do in the Shadows is a Black Comedy sitcom Spin-Off of the film of the same name, airing on FX, with heavy involvement from the film's creators Jemaine Clement and Taika Waititi. The first season premiered in March 2019, with season 2 following in April 2020. The show has since been renewed for a third and fourth season; the third season premiered in September 2021 and the fourth season in July 2022. All seasons can be watched on Hulu, and the first and second seasons can be purchased on Amazon Prime Video.

Like the film, the show is a Mockumentary which follows the lives of a group of vampires living together and their antics as they struggle to understand and adapt to the modern mortal world. Instead of taking place in New Zealand, though, the show jumps to Staten Island, New York. There are four vampires: Nandor the Relentless (Kayvan Novak), a former warlord from the Ottoman Empire, Nadja of Antipaxos (Natasia Demetriou), a Greek peasant woman, Laszlo Cravensworth (Matt Berry), an English nobleman and Nadja's husband/progeny, and Colin Robinson (Mark Proksch), a day-walking psychic vampire, all living together in a commune. Assisting them is Guillermo (Harvey Guillén), Nandor's familiar whom Nandor has promised to turn into a vampire someday. Maybe.

Not to be confused with the trope What You Are in the Dark.

Example of:
The Smart Guy

Alternative Title(s): What We Do In The Shadows