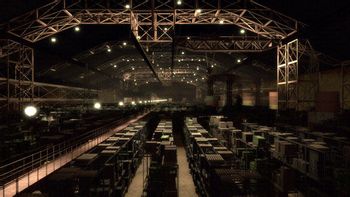 "I like to think of it as America's attic." — Artie
"If a radio landed in the hands of Thomas Jefferson, do you know what Jefferson would do? He would just lock it up, until he figured out it wasn't going to kill him. And that's exactly what we do here: take the unexplained, and safely tuck it away."
— Artie, from the pilot episode
Advertisement:

Quick Summary: Raiders of the Lost Ark meets The X-Files.

When Secret Service agents Pete Lattimer and Myka Bering stop an assassination attempt on the President at the hands of a museum employee who was turned into a Manchurian Agent by one of the artifacts, which they discover to be the cause, they find themselves suspended from duty and given a transfer to an isolated government storage facility in South Dakota called Warehouse 13. Their new job? Use their unique skills that allowed them to get too close to the truth to find magical artifacts that have a tendency towards unintended consequences and stow them away in the Secret Government Warehouse to end all Secret Government Warehouses.

There have been 12 prior incarnations of the Warehouse that stretches back into Ancient Egypt. The Warehouse itself has an Omniscient Council Of Vagueness, between its Agents, Caretaker, and Regents, but there are individuals who have an eye on unlocking its secrets for their own means. Outside of hunting down the new artifacts, there is always a dilemma cooking up back at the warehouse where one of the miscellaneous items is being experimented on, stupidly misused, or otherwise going haywire.

In many respects Syfy's Warehouse 13 (2009-2014) is a more comedic, fantasy oriented version of The X-Files, with a generous side helping of Steampunk. Their standard sidearm Stun Guns are called Teslas (actually created by Tesla) and utilize vacuum tubes in their design. The emphasis here is also almost entirely on magic; free energy devices are not mentioned, which is a marked divergence from warehouses of this type that are believed to exist by Real Life conspiracy theorists.

The show starts out well, but in the third and fourth seasons, degenerates into a series of hyper-inflated, Godzilla Threshold or Evil vs. Oblivion plots, where the stakes are so ridiculously high that it causes audience desensitisation and boredom, which may have contributed to the reason why it was cancelled. It is also very similar to Ready Player One, in terms of being very heavily laced with memes, pop culture references, and Stock Shout-Outs; some of which are very funny and effective, while some are cringe-inducingly lame.

Warehouse 13 is part of the "Syfy-verse," existing in the same fictional universe as Eureka and Alphas. Crossovers have happened, however, there is a case of You Look Familiar where some actors who play certain characters in one show guest-star as completely different characters on Warehouse 13.

Note: In real life, the term "Warehouse 13" is used on some software systems that failed to have a means to mark inventory as lost, misplaced, or stolen, so, in order to make the books balance, anything missing was listed as being in "warehouse 13." Probably a play on "file 13," the nickname for throwing something in a wastebasket.