Series / War of the Worlds 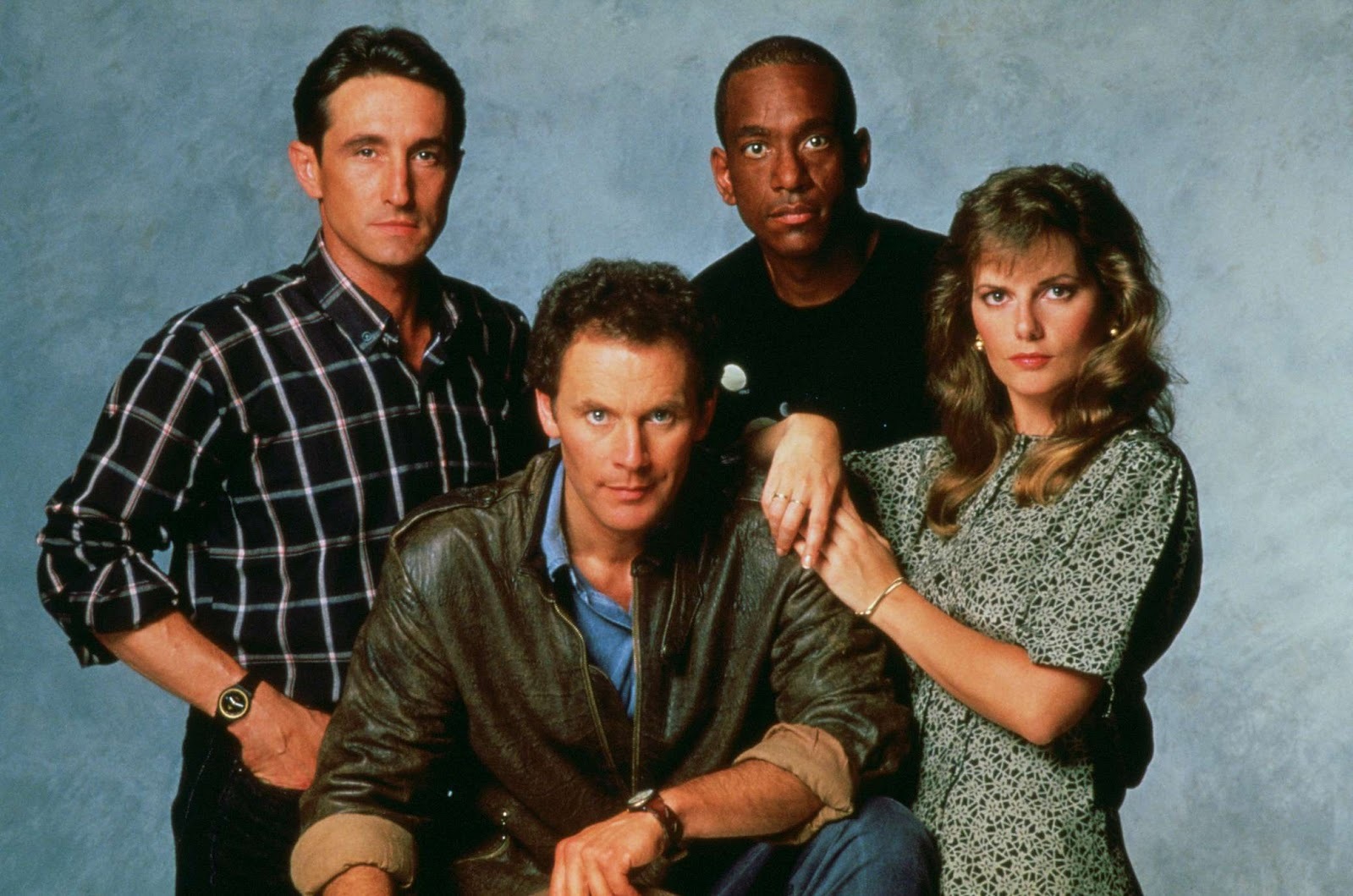 The first season cast. Left to right: Colonel Ironhorse (Richard Chaves), Dr. Blackwood (Jared Martin), Norton Drake (Philip Akin) and Dr. McCullough.
"In 1953, Earth experienced a War of the Worlds. Common bacteria stopped the aliens but it didn't kill them. Instead they lapsed into a state of deep hibernation. Now the aliens have been awakened, more terrifying than before. In 1953, the aliens tried to take over the world. Today, they're taking over our bodies."
— Jared Martin as Harrison Blackwood

"There's rioting breaking out through the city. Fire is continuing to burn everywhere. Troops are shooting people. My God, I...I don't know why! There's a woman dying in front of me, and no one's helping her! There are conflicting reports about who or what started the chaos. Will someone tell me what's happening? This is madness! What is this world coming to?"
— Off-screen news reporter as the camera flies around a model night-time cityscape

Based on the 1953 movie, War of the Worlds added cold war sensibilities and a liberal dose of Invasion of the Body Snatchers to create the prototype for alien invasion Sci-Fi in the 1990s.

The two-hour premier retconned the ending to the George Pal movie (and, for that matter, the H. G. Wells novel), deciding that the aliens were really Not Quite Dead, but simply comatose. A terrorist attack on a storage facility exposed the alien bodies to radioactive waste, neutralizing Earth bacteria and awakening the aliens, who promptly revealed a nifty new ability: they could absorb themselves into human bodies, at least until radiation (and the fact that the host was essentially an animated corpse) caused the body to break down. Also the aliens were eventually revealed to be from the planet Mor-tax 40 light-years away in Taurus, rather than Mars, as was assumed in the original movie (though never confirmed except in the prologue narration).

Since, as part of the show's gimmick, almost no one remembered the 1953 invasion, the only opposition to the alien plot were the members of the Blackwood Project, a secret military taskforce assembled to repel the alien menace. The Blackwood project was approximately a Five-Man Band composed of:

Taking a cue from the movie, the first season included a heavy religious allegory, with most of the individual episode titles inspired by bible quotes.

After a season of fighting aliens who were, essentially, stand-ins for communists, the show was taken out of the hands of executive producers Sam and Greg Strangis and given to Frank Mancuso Jr., who radically retooled the show. Chavez and Akin were written out, replaced by Adrian Paul, and the world of the series was reimagined as a Cyber Punk (minus the futuristic technology) Dystopia in the midst of collapse, with the new tagline "Almost Tomorrow" usually taken to mean that the show had shifted 20 Minutes into the Future, though this never became explicit. A "second wave" of invaders, calling their planet Mor-thrai instead of Mor-tax and themselves Morthren, arrived on Earth following the destruction of their homeworld by a "light storm". Physical possession was replaced with cloning process and, basically, everything else about the show changed. (The only remaining sign that this was meant to take place in the same universe as the original movie came in the episode "Time To Reap", when the characters traveled back in time to 1953, and in the series finale, "The Obelisk", where footage from the movie was used in a flashback montage.) The alien race was even renamed.

The Retool is generally reviled by fans, so much so that many believe Mancuso intentionally sabotaged the show in favor of one of its perceived competitors, Mancuso's own brainchild, Friday the 13th: The Series. Over the years however the second season has developed quite a few defenders.

The show's violence was substantial, starting as early as the first season. Each time an alien was killed or otherwise injured, they spent significant time focusing on excessive alien gore and an almost Fanservice-like fascination with showing the putrifying alien corpses. Think of a floor spill consisting of smoking egg whites cooked sunny side up with a side order of mucus and radiator fluid, and you get an idea of the milder forms of some of the gore factor. Being that it was a syndicated show the human gore factor wasn't particularly restrictive either, being almost R-rated in terms of human gore. It was relatively toned down during the second season, but still somehow became even darker.

Noteworthy guest-stars included Ann Robinson, who reprises her role from the film as Sylvia Van Buren, the now-insane love interest of Clayton Forrester (who became his wife and adoptive mother of Harrison), and John Colicos (of Battlestar Galactica fame, see Large Ham) as the renegade alien Quinn. Not to mention a cameo by Australian rock legend Billy Thorpe, who also provided the music for the first season.

Though the show is now mostly forgotten (for many years, the show's owners at Paramount denied that it had ever even existed), its influences can be seen in many of the series that followed, such as First Wave, The X-Files, Earth: Final Conflict and Dark Skies.

In June, 2005, no fewer than three new and unrelated feature films based on The War Of The Worlds were released. No official ties to the TV series were made, though it has been noted that the poster for the Tom Cruise version bears a marked similarity to the first season logo. The show was also (finally) released on DVD, with the second and final season put out five years after the first season set.

The show now has a recap page.