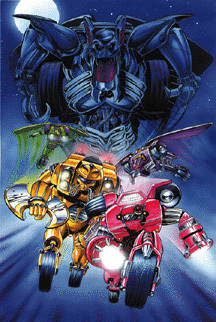 Van-Pires was a live-action/CGI animation hybrid show from 1997 to 1998, running 13 episodes. It was unique for the time because of its full CGI animation besides the live-action segments. Its theme song and soundtrack were also written and sung by John Entwistle, formerly of The Who.

The show centered on four teenagers who like to hang around at the junkyard. One day they are caught in the path of a meteor, and it gives them the power to transform into vehicular robot guardians and fly. They use their new powers to transform into vehicles when they get into their CarFins. Not all vehicles are good, though. Van-Pires are vehicles with no human form, just evil machines who suck fuel out of innocent cars during the night. The story follows the teens, who make a team called the Motor-Vators, on their struggle to protect the world from Van-Pires.