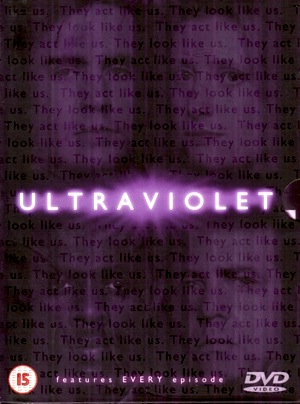 about vampires in modern London, and a squad which hunts them. Played extremely straight: the vampires don't go around picking fights with people they know can kill them.

The good guys have weapons such as garlic gas grenades, carbon bullets and knives, and guns with video cameras on the side. UV vampires don't register on cameras, video or audio equipment, in addition to not having reflections. However, alarms do go off when they push past an Underground ticket barrier, and they can use keyboards.

The protagonist/point of view character is DS Mike Colefield (Jack Davenport), who learns of the existence of vampires in the first episode and is recruited by the vampire hunters for his investigative experience. He spends the series dealing with his doubts about the team's extreme methods and struggling with the personal fallout of his unexpected new life. Other key members of the team include Pearse Harman (Philip Quast), the team's leader; Vaughan Rice (Idris Elba), a former soldier who joined the cause after his squad was wiped out by vampires; and Dr Angela March (Susannah Harker), whose husband was killed by a vampire and who now studies them in search of better ways to fight them.

Not to be confused with the Milla Jovovich Film Ultraviolet (2006) from 2006, which features vampire-like mutants.