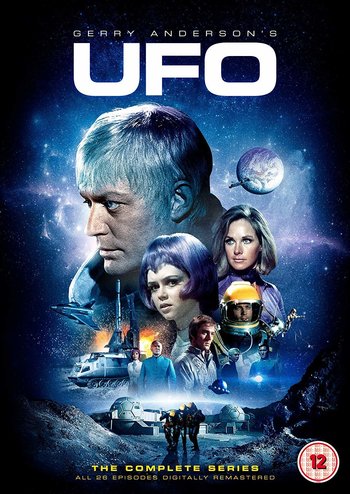 Ah, the 1980's. When men were real men and women wore purple wigs.
"The Earth is faced with a powerful threat from an extraterrestrial source. We've moved into an age where science fiction has become fact. We need to defend ourselves."
— Commander Ed Straker, "Identified"
Advertisement:

UFO is a British live-action Science Fiction television series created by Gerry Anderson and his wife Sylvia Anderson (with Reg Hill), the creators of Thunderbirds. It was Gerry Anderson's first live-action series. Filming began in 1969, and the show aired between 1970 and 1971, with one episode delayed until 1973.

In the future year of... 1980, Earth is under attack by UFOs sent by a dying race (no name for the aliens is ever given) seeking to harvest our organs. A top-secret multinational organisation called SHADO (Supreme Headquarters Alien Defence Organisation, pronounced "Shadow"), led by the dedicated Commander Straker, is given unprecedented (though not limitless) resources to suppress knowledge of the aliens while at the same time sussing out ways to fight them.

The series is remembered for its garish decor, glamorous girls in miniskirts, and dark (for the time) subject matter. Few episodes had genuinely satisfactory endings; at most SHADO would prevent major acts of destruction while sacrificing a few innocent people, and their attempts to discover more about the aliens frequently came to naught. The stories included such adult themes as drug use, adultery, inter-racial relationships, and the breakdown of Straker's marriage under the strain of the job.

This dark reimagining of Captain Scarlet unfortunately backfired, as most broadcasters were expecting the Andersons' usual children's fare. Erratic broadcasting schedules (no two regional stations ever simulcast the show) and indifferent American broadcasters, who reacted with a collective "WTF?", prevented UFO from cultivating an audience. Without US support, a second season set on a more advanced Moonbase in the 1990's was scrapped, and the pre-production design and model work (and basic concepts) reused for the marginally more successful Space: 1999.

Even if UFO's original impact was limited, it still had a significant influence on international pop culture. Both the video-game developer MicroProse and the anime studio Gainax have cited the series as a main inspiration for X-COM and Neon Genesis Evangelion, respectively.

After languishing in Development Hell for years, a feature film based on the series was supposedly moving ahead

for release in 2012. Perhaps unsurprisingly, nothing seemed to come of it.

No relation to Project UFO, nor to the rock group UFO.

"The Earth is faced with powerful tropes from an extraterrestrial source."