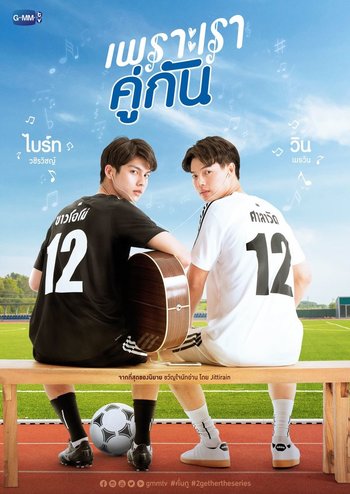 2gether: The Series is a 2020 Thai romantic-comedy television series under TV network GMMTV. It is the Live-Action Adaptation of the Yaoi Genre novel 2gether by writer Jittirain, and stars Thai actors Vachirawit "Bright" Chivaaree (who plays Sarawat) and Metawin "Win" Opas-iamkajorn (who plays Tine). Set in college, it tells the story of an outgoing music fanatic who pursues an introverted band guitarist to become his fake boyfriend, in order to evade a consistent admirer.

2gether: The Series aired on GMM 25 from February 2020 until May 2020, spanning for a total of 13 episodes, with one aired per week. It is available worldwide with english subtitles for free on GMMTV'S official Youtube channel, on Netflix Asia, and on LINE TV Thailand.

In August 2020, its special sequel Still 2gether started airing with a total of 5 episodes, set after the events of 2gether: The Series.

The series became the most-viewed Boys' Love series from Thailand, breaking the record in a span of 3 months after its last episode aired. As of December 2020, it has garnered over 540 million views on Youtube and LINE TV. The series also brought actors Vachirawit "Bright" Chivaaree and Metawin "Win" Opas-iamkajorn, better known by their couple name Bright-Win, to being household names in Southeast Asia.

2gether: The Series contains examples of the following tropes: