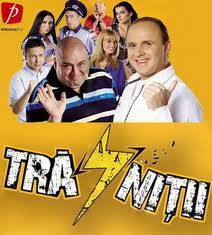 Trăsniții (the Crazies) is a Romanian sitcom that debuted in 2003 on Prima TV, originally was supposed to air on PRO TV with the name "Tot Inainte (Straight Ahead). The show was originally known as Trăsniții în NATO (The Crazies in NATO) and followed a group of 6 soldiers

Who are often given a special task or mission by their Commander, George Șefu (George Stancu).
Advertisement:

As time went by new characters were introduced

After a series of events the military unit is destroyed leading the characters to live civilian lives (except for Trașcă and Iepuraș who are killed in the process) with once again leads to the apparent of new character.

And many many others.