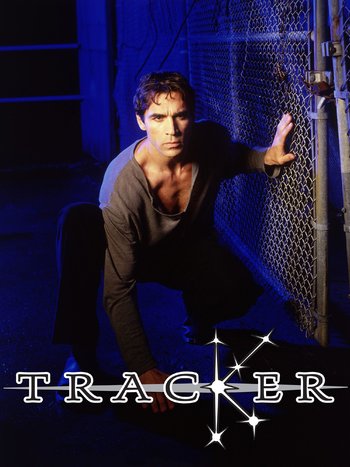 Cole (Adrian Paul), on the hunt for fugitive aliens.
"This is Cirron, my home. One of six planets in the Migar Federation. There was a prison break. Two hundred eighteen of the most violent fugitives have disappeared into the city of Chicago. Finding them won't be easy. They aren't human. Fortunately for Earth, neither am I."
— Cole, opening narration
Advertisement:

A syndicated sci-fi series that aired during the 2000–01 U.S. TV season. Tracker centered on an extraterrestrial bounty hunter named Daggon, known as Cole on Earth, who was sent to find and capture 218 alien fugitives hiding in human bodies in the city of Chicago. He is found soon after his arrival by Mel Porter, owner of a Chicago bar called the Watchfire, and she quickly begins aiding Cole in his quest. Over the course of the series, they form a close friendship and discover secrets about Mel and her family. Other characters include Cole's nemesis, Zin; Mel's on-again off-again boyfriend, Detective Vic Bruno, and Mel's best friend, Jess.