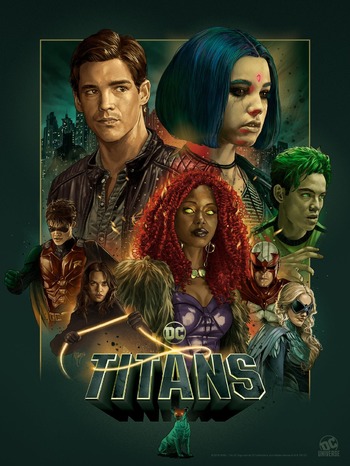 "There are no sidekicks in Titans. We're partners. We have each other's backs."
Rose: What the hell is this place anyway?
Dick: This is a place where people like you can learn how to be the best version of who you are.

Titans is a 2018 live-action superhero series, based on the DC Comics team Teen Titans.

Produced by Geoff Johns, Greg Berlanti, Akiva Goldsman, and Sarah Schechter, Titans was created for the DC Universe streaming service after previously being in development at TNT since 2014. The first season had 12 episodes. It aired on DC Universe in the United States and on Netflix internationally.note Since DC Universe is still US-only, though there are plans to expand. It premiered on DC Universe on October 12, 2018, with episodes being released weekly.

The fourth episode of series introduced the superhero group Doom Patrol, which later got their own series, Doom Patrol, also airing on DC Universe. Despite the Doom Patrol cast reprising their roles in the spin-off, the two series are not canonically connected as far as we know. Nevertheless, they are grouped under the Titansverse banner for convenience's sake. Note that Titansverse does not include Swamp Thing or Stargirl, even though both are also live-action series airing on DC Universe.

Prior to release, Titans was greenlit for a second season, which started airing on September 6, 2019. A third season has been ordered.