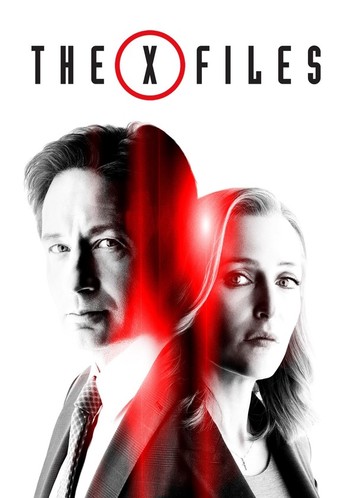 "I want to believe."
The truth is out there.
Advertisement:

The X-Files is an American supernatural mystery-drama series created by Chris Carter, which originally aired for nine seasons (1993–2002) on Fox, crossed into two theatrical feature films (Fight the Future, which was The Movie, in 1998 and I Want to Believe in 2008), and saw a limited revival in the form of a six-episode 10th season in 2016 and ten-episode 11th season in 2018, both also on Fox.

Dr. Dana Scully (Gillian Anderson), a physician and special agent with the FBI, is assigned the job of keeping tabs on fellow agent Fox Mulder (David Duchovny), an odd but skilled detective whose deep obsession with the paranormal is of grave concern to his superiors. Working out of an office in the Hoover Building's basement, Mulder specializes in the Bureau's "X-Files": a collection of cold cases deemed unsolvable due to macabre or taboo elements. While Mulder is quick to attribute these to the supernatural and extraterrestrial, Scully is a skeptic who attempts to debunk his theories through scientific reasoning. Together they investigate all manner of strange and unusual cases, which over time hint at a massive government conspiracy linked to a series of alien abductions going as far back as the 1940s.

The show's writers, who included Carter and future Breaking Bad showrunner Vince Gilligan, were celebrated for their innovative blend of cop-show conventions, Moonlighting style romance, new age mysticism, urban legends, government conspiracies, action, wryly sardonic humor, and genuinely scary moments. The show's high production values and sharp writing helped it to reach beyond the niche Twin Peaks crowd to make it one of the most popular and acclaimed shows on television and a bona fide international cultural phenomenon. It was also one of the earliest series to be released in box sets (albeit on VHS, with inflated price tags) containing behind-the-scenes goodies. These sets became a common sight in supermarkets and rental stores, which fueled viewership even more.

Although it genuinely was good in its own right, the series arrived at the right time for that to happen; mainstream interest in ufology and related topics peaked in around 1998. These days, however, E.T. doesn't get quite as much airtime as he used to outside of fringe circles, and as a result, The X-Files as a series is a lot less culturally relevant now than it was during production.

Episodes alternate between standalone Monster of the Week episodes and a complex, unfolding Myth Arc confirming pretty much every terrifying "conspiracy" of the past forty years (and even predicting a few new ones): there was a second gunman, the Cold War was a sham, the government is in cahoots with various factions of extraterrestrial beings, and all of us are slaves to the machinations of sinister (and, worse, borderline incompetent) old men in smoke-filled back rooms. A quarter to a third of each season figures into Mulder's ever-growing investigation, though this was put on hold in 1997 to avoid conflicts with Fight the Future (then in post-production), resulting in the Denser and Wackier Season Five; several of the show's most acclaimed comedic episodes were aired during this period. The final season was supposed to be followed by a series of movies that would eventually resolve the ongoing plot, but the first post-series movie didn't touch on the conspiracy plotline and met with only lukewarm success. The show also received a short-lived spinoff, The Lone Gunmen.

The future of The X-Files and its Myth Arc remained uncertain for a long time while die-hard fans kept expecting a third film that would either close-up the mystery or revive the franchise. In March 2013, IDW announced that they would be continuing the series as a comic book

. The comic book, marked as the tenth season, came out in July 2013 and picks up after the events of the second movie. And now it has a trope page!

, which functions as the 10th season, with the involvement of Carter, Duchovny and Anderson began airing January 25th, 2016, and feature a split of mythology and Monster of the Week episodes. Former writers/producers James Wong, Darin Morgan, and Glen Morgan contributed to the revival, and composer Mark Snow will also return. The first full-length trailer can be viewed here

. After this, an 11th season, consisting of ten episodes, started airing on January 3, 2018. Following this, though, Anderson has expressed reluctance to do further seasons, and Carter has declared the series on hold as a result, possibly permanently.

and many sub-pages like a character sheet or recaps.

"Cold Cases", a series of Audio Adaptation episodes of the season 10 comic books with revisits to past cases such as the Flukeman, was released on Audible on July 18, 2017, featuring the voice talents of Duchovny, Anderson, Mitch Pileggi, and more. It does not correspond to the season 10 TV miniseries continuity.

As a long-running show with a passionate fanbase, the series has attracted many recap, review and parodies from the internet: The AV Club

had one, primarily by Emily VanDerWerff and Zack Handlen, a former Mary Sue writer has been working on a review blog

of the entire series for 5 years, there's a podcast recapping the whole series

and a webcomic recapping all the episodes has been started by Shaenon K. Garrity.

The X-Files and its Myth Arc provide examples of the following tropes: