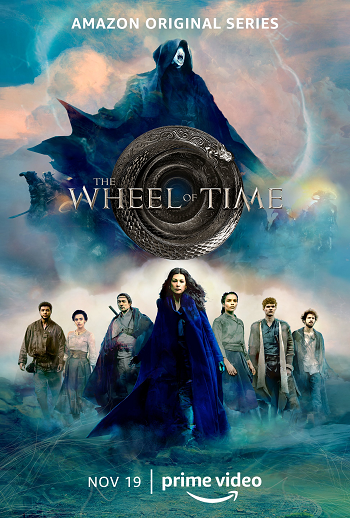 "The world is broken. Many, many years ago, men who were born with great power believed they could cage Darkness itself. The arrogance. When they failed, the seas boiled, mountains were swallowed up, cities burned, and the women of the Aes Sedai were left to pick up the pieces. These women remembered one thing above all else, the man who brought the Breaking of the World. And him they named Dragon. Now, this man has been born again. We don't know where or to whom. If he was reborn as a girl, or a boy. The only thing we know for certain is that this child is coming of age now, and we must find them, before the Dark does."
— Moiraine Damodred
Advertisement:

The Wheel of Time is a 2021 American High Fantasy TV series by Amazon Prime, based on the popular book series of the same name from the late Robert Jordan. Though screen rights were sold in 2000, a live-action adaptation of the books had spent many years in development hell before finally premiering on Prime Video on November 19, 2021. note In 2015 Red Eagle Entertainment, who owned the rights at the time, released a 22 minute pilot of a potential TV series named Winter Dragon, but in the middle of the night, solely to keep ownership before the rights expired. This was strongly criticized by Harriet McDougal, Jordan's widow and owner of his books. Following a lawsuit, the series was announced in 2017 by Sony. Eventually, Amazon Studios signed to co-produce it in 2018. Filming began in 2019, but halted due to the COVID-19 Pandemic. However, it began again in 2021, completing by May. A second season has already been scheduled and is filming.

Like the books, the show is set in a world where the magic of the One Power is restricted to women, most prominently the sorceresses of the Aes Sedai organization. Moiraine Damodred (Rosamund Pike), an Aes Sedai of the Blue Ajah, and her loyal Warder al'Lan Mandragoran (Daniel Henney) are in search of the Dragon Reborn, a reincarnated savior prophesied either to save the world or destroy it. After encountering five young people from the secluded Two Rivers — talented archer and shepherd Rand al-Thor (Josha Stradowski), charming thief Mat Cauthon (Barney Harris), loyal smith Perrin Aybara (Marcus Rutherford), promising channeler Egwene al'Vere (Madeleine Madden) and pragmatic Wisdom Nynaeve al'Meara (Zoë Robins) — Moiraine concludes that one of them is the Dragon Reborn.

Shortly after, the Two Rivers is attacked by the forces of the Dark One, a primordial evil. Moiraine and Lan take flight with the youths to determine which of them is the Dragon. The group must now evade the Dark One's underlings and figure out how to best harness their powers and abilities to save the world.

Alternative Title(s): The Wheel Of Time