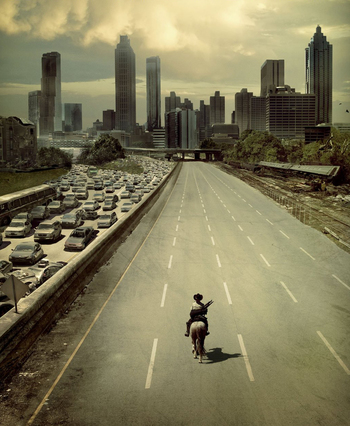 Like the comic, its story focuses on a group of survivors struggling to stay alive in a world overrun by undead humans. Rick Grimes, the leader of the group, awakens in the hospital from a coma to find everything has gone downhill. He sets out to find his family, and the rest of the show focuses on him and the rest of the characters as they adapt and relate to each other in a terrible new world. Though the survivors face great hardship—not just from the walkers, but also from people who are far worse than the undead—they find that their most vital resources are each other, and the will to survive day by day. The group takes casualties, finds new members, suffers brutal defeats, but they push on, with the hope that things get better, no matter how briefly, beyond the horizon.

The series premiered on October 31st, 2010 on AMC, and was produced by Frank Darabont and Gale Anne Hurd. Glen Mazzara took over as showrunner for seasons 2 and 3, followed by Scott M. Gimple, who oversaw seasons 4-8, with Angela Kang taking the reins starting with season 9. Comic creator Robert Kirkman is also heavily involved with the production, including being the writer for several episodes. The Walking Dead will conclude with its eleventh and final season, nearly twice the length of a usual season, that began airing August 22nd, 2021.

The show's writers are knowingly taking (creator-approved) liberties with its source material, so comic readers, don't expect to come into this knowing everything beforehand. Word of God says that the intention from the start has been to approach the series as an Alternate Continuity of its own, in which certain events play out differently — sometimes radically so — due to the Butterfly Effect ripples of the additions and subtractions of various characters and events major and minor.

Several spin-offs taking place in the same canon as this series have been produced, with several more slated for future production; see here for more information about these projects.

A Robot Chicken special titled Look Who's Walking, based off the series, aired in late 2017, with many of the show's actors reprising their roles.

See also The Walking Dead: Survival Instinct, a first person shooter video game set in the TV series continuity. And The Walking Dead (Arcade), a rail shooter arcade based off the TV show.

Simon shows how he prefers to cut losses: by massacring an entire colony in a fit of rage and letting their leader live out of Cruel Mercy.

Simon shows how he prefers to cut losses: by massacring an entire colony in a fit of rage and letting their leader live out of Cruel Mercy.