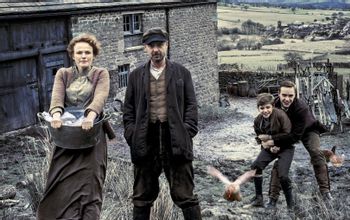 This is the happiest you will ever see these characters. Really.
Advertisement:

The Village is a 2013 period drama series produced by The BBC and created by Silk writer Peter Moffat. The series is depicted through flashbacks, as Bert Middleton, the second-oldest man in Britain, reminisces about his life in early 20th Century Derbyshire.

The show is comprised of an ensemble cast headed by John Simm and Maxine Peake.