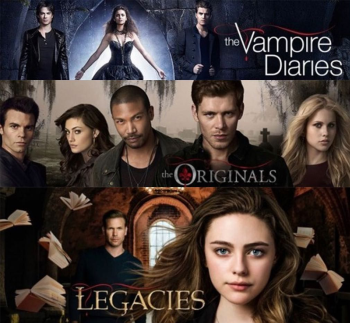 The Vampire Diaries Universe is the name of the Shared Universe based on The Vampire Diaries book series by L.J Smith. The original books were eventually adapted into a TV show, The Vampire Diaries, based on them for the CW. Both follow Elena Gilbert as she discovers the existence of the supernatural through her relationship with a vampire, Stefan Salvatore. The success of the TV show led to the creation of the spin-off The Originals, which follows the Mikaelson siblings as they try to protect Klaus' daughter. This in turn led to its own spin-off, Legacies, concerning the adventures of Klaus' daughter, Hope. There was also a series of comic books published by DC Comics and two web series that tied into the shows. Works in the franchise include:
Advertisement:

Tropes shared across the franchise: