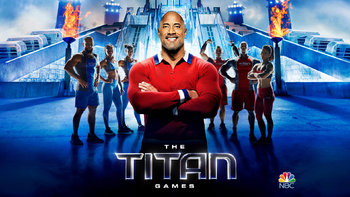 Titan's aren't born, They're Made.
Advertisement:

An NBC Sports Competition show hosted by Dwayne "The Rock" Johnson. 8 Men & Women are invited to the Titan Arena to compete in a series of gruelling matches inspired by The Rock's personal workouts. Then, the 2 Men & 2 Women will compete in "Mount Olympus" for a chance to become "Titans". Then, in the season finale, the remaining Titans will square off once again for the title of "Titan Champions".

The Titan Games provides examples of: