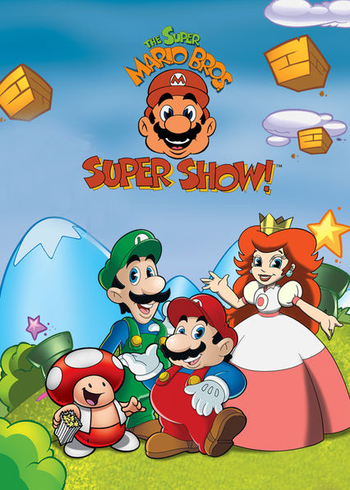 You'll be hooked on the Brothers!
Hey, paesanos! It's The Super Mario Bros. Super Show!
Advertisement:

The Super Mario Bros. Super Show is a 1989 animated/live action DiC production and an Animated Adaptation of Nintendo's flagship games, featuring the adventuresnote it's unlikely that the show has anything canon with the games outside of setting and characters, so consider it an Alternate Continuity of those plucky plumbers from Brooklyn, the Super Mario Bros.. Mario is voiced and portrayed in live-action by professional wrestler Captain Lou Albano, with Canadian actor Danny Wells as Luigi.

The show was presented in a Three Shorts style, where one live-action story is split into two parts and straddles an animated short. The live-action short features the brothers in Brooklyn before they were sucked into the Mushroom Kingdom, providing plumbing duties for normal joes (like Dr. Frankenstein) and celebrities (like Lyle Alzado and Cyndi Lauper) alike. The animated short features Mario and Luigi who (as shown in a in-show bumper) wound up stuck in the Mushroom Kingdom while doing a routine plumbing job and got sucked down a drain which happened to be a warp pipe. They inadvertently save Princess Toadstoolnote her American name at the time, years before the West officially adopted her Japanese name, Peach, in Super Mario 64 and her servant Toad from the evil King Koopa.note Bowser. Long story. The episodes saw the group travelling the oddly variously themed sections of the Mushroom Kingdom, as the Brothers and Toad bodyguard Toadstool from Koopa and saving the lands they visited while trying to find a way back home.

The show ran in syndication for 65 episodes (13 weeks) in the fall of 1989, syndicated by Viacom Enterprises. Each of these episodes featured a Mario live-action segment, whilst each Monday-Thursday episode featured a Mario cartoon segment, with Fridays reserved for a cartoon based on The Legend of Zelda. It has two sequel series: The Adventures of Super Mario Bros. 3 and Super Mario World. After its initial run the cartoon segments became the basis of another show called Club Mario with different live action wraparounds featuring a pair of Totally Radical dudes named Tommy Treehugger and Co-M.C., and a segment called "Spaced Out Theater" that showed clips from the old sci-fi show Photon.

"Until next time, everybody... Do the Mario!"

Mario: Are they talking about us?
Luigi: You better believe it!note A variation of an ad bumper where this appears (Originally it's "Is he..."). It was also said in at least one of the live action segments themselves.