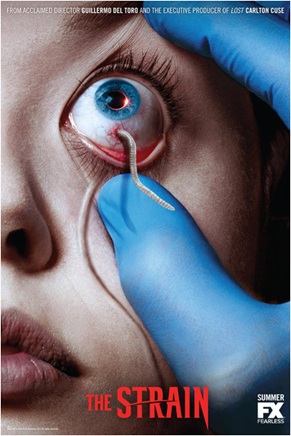 Yeah, you should probably get that checked. Eww.
Advertisement:

The Strain is a vampire horror television series that debuted July 13, 2014 on FX. It was created by Guillermo del Toro and Chuck Hogan, based on their novel trilogy of the same name. Del Toro and Hogan scripted the pilot episode, which was directed by del Toro.

A plane lands at John F. Kennedy International Airport with its lights turned off and its doors sealed. Epidemiologist Dr. Ephraim Goodweather (Corey Stoll) and his team are sent to investigate. Once on board, they discover two hundred corpses and four survivors. The situation deteriorates when the bodies begin disappearing from morgues. Goodweather and a small group of allies find themselves battling to protect not only their own loved ones, but the entire city, from an ancient threat to humanity.