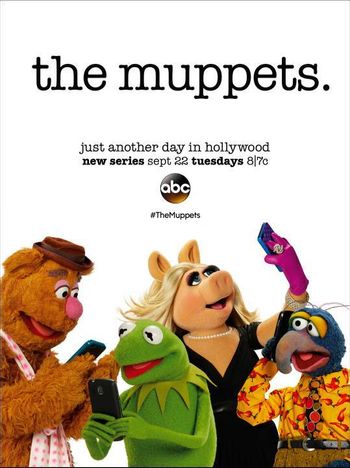 It's Prime Time to get things started!
"Cut to interviews? That is just a totally overused device to make easy jokes. You know, talking to the camera about how you really feel, and then cutting back and saying something completely different! I just hate that!"
(woosh)
"I love it! Great device!"
—Gonzo
Advertisement:

The Muppets (stylized as the muppets.) was a live-action series co-created by Bill Prady and Bob Kushell, based on the famous characters created by Jim Henson, premiering on ABC on September 22, 2015, and ending March 1, 2016. It is The Muppets' first full-fledged TV series since Muppets Tonight on the same channel nearly 20 years prior.

Like all of the previous Muppet TV series, The Muppets is a Show Within a Show, set behind the scenes of a talk show hosted by Miss Piggy that airs on ABC after Jimmy Kimmel Live! (in-universe). Like fellow workplace sitcoms The Office and Parks and Recreation, it is a single camera mockumentary, featuring cutaway interviews with the Muppets to glean insights about their personal lives and triumphs and disappointments. Essentially, it's "a more adult Muppet show—for children of all ages."

The test pilot was apparently extremely well-received, and was chosen to be screened at various summer festivals as part of ABC's Summer Block Party, as well as San Diego Comic Con during the show's panel. Eventually, due to popular demand from the Comic Con screening, ABC made the pilot

available on their YouTube channel. Following the 2015 winter hiatus, the second half of Season 1 was given something of a retool, mainly by letting the other Muppets get involved with Up Late in front of the camera as opposed to behind the scenes.

On May 12, 2016, ABC announced the cancellation of the series after one season, making it the third shortest-lived Muppet series behind The Jim Henson Hour and The Little Muppet Monsters.

Not to be confused with the 2011 film of the same name - or for that matter the original Muppet Show.

The pilot presentation features examples of the following tropes:

Waldorf: Uh, which way do I turn the knob if I think this Muppet show is terrible?
Statler: To the left.
Waldorf: It won't go any further!
Statler: Sure it will! I turned mine so far I broke it!
Both: Do-ho-ho-ho!