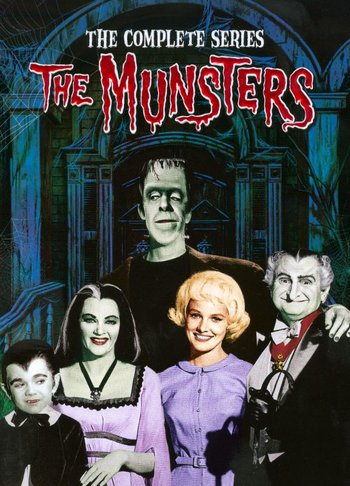 A Mundane Fantastic Dom Com, originally airing on CBS from 1964–66, about a working class family of would-be monsters.

The Munsters experienced surprisingly high ratings during the period before the Batman TV series came on, revolutionizing color TV. The humor of the series came from the odd juxtaposition of many "cartoon" antics in a live-action series, namely "Fast Motion", as well as the fact that despite their gothic appearance, the family doesn't seem to think they're different from anyone else... with the exception of cousin Marilyn, who didn't inherit "The Family Look".

They also helped set the standard for what a healthy marriage looked like; not only were Lily and Herman among the first TV couples to be seen sharing a bed together, but their marriage is over a hundred years old! They also showed a realistic relationship, in that while they would have occasional disagreements and sometimes even argue, they still remained extremely supportive of one another and rather than make grand romantic gestures, their love was shown in the little ones, like Herman famously giving Lily pecks on the cheek before work.

Though the Munsters themselves are often compared with the eponymous Addams Family, there are considerable differences. The Addamses are, in essence, landed gentry (their history in the US goes back to the Pilgrim era), very refined and elegant and independently wealthy, while the Munsters are working-class recent immigrants (Grandpa having immigrated from Transylvania), and Herman has a quite coarse sense of humour. And while the Addamses are borderline supernatural in some vaguely defined way, the Munsters are explicit monsters based on well-known horror archetypes.

The Munsters are composed of:

Thanks to the aforementioned Batman, The Munsters had a short run, only airing 70 episodes over two seasons before being cancelled. Partly as a response to the color television craze that played a part in the series' downfall, and partly to introduce the concept to international audiences ahead of the series' syndication, Universal released The Movie Munster, Go Home! shortly after the series ended, with "See your favorite Munsters in TECHNICOLOR!" being a major theme of the marketing. Unfortunately, the film was a flop.

The show found a large audience in syndication, enough so that a reunion movie was produced in 1981, titled The Munsters' Revenge. This would be the final time the original castnote sans Pat Priest and Butch Patrick, the latter of which being replaced by another child actor would play their roles in a main Munsters work, but it would not be the last Munsters project of The '80s, as a revival series entitled The Munsters Today aired in syndication from 1988-91, replacing the entire original cast. The Munsters property was revived for two more television movies, Here Come The Munsters and The Munsters' Scary Little Christmas, both of which aired on Fox.

NBC had optioned a reboot of the series created by Bryan Singer and Bryan Fuller entitled Mockingbird Lane. It was to be a drama. The pilot episode aired as a TV special on October 26, 2012, but NBC didn't pick it up. In August 2017, another reboot of the series attempt was announced, but this seems to have fallen into Development Hell.