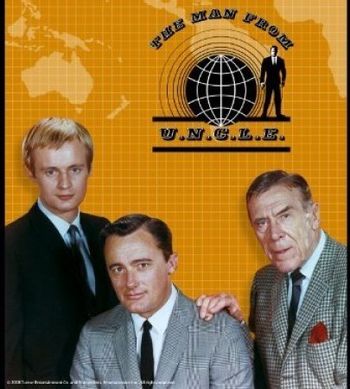 A one hour dramatic series which ran from September, 1964 through January, 1968 on NBC. Created by Norman Felton and Sam Rolfe with limited assistance from Ian Fleming. Fleming contributed the last name of the main hero, "Solo" (originally a very minor character in Fleming's novel Goldfinger and its movie adaptation), and a minor character, April Dancer, who appeared in the main series in only one episode. (This episode was a Poorly Disguised Pilot for the spin-off, The Girl from U.N.C.L.E.) The series also owes a lot of its style, especially in its "innocent gets caught up in international intrigue" conceit, to Alfred Hitchcock's North By Northwest.

One of the very first shows to capitalize on the spy craze of the early 1960s, the series featured the adventures of two enforcement agents of a multinational law enforcement and intelligence organization: the United Network Command for Law and Enforcement. Their mission: an ongoing struggle against wrongdoers who threaten world security, especially their recurring nemesis, an organization known as THRUSH, which strives for world domination. The series's unique gimmick was that just about every episode involved an "innocent civilian" in the week's plot. Sometimes the civilian was a willing volunteer in U.N.C.L.E.'s machinations against its opponents, but other times the innocent was merely a passerby who happened to be in the wrong place at the wrong time, and thereby became involved in the plot (i.e., a Heroic Bystander).