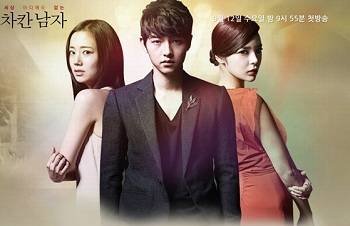 The Innocent Man
The Innocent Man (Hangul: 세상 어디에도 없는 착한 남자; RR: Sesang Eodiedo Eobneun Chakan Namja; literally "A Nice Guy the Likes of Which You Would Never Find Anywhere in the World"; also known as Nice Guy ) is a 2012 Korean Series aired by KBS. Described by The Other Wiki as a classic Melo Drama involving betrayal, revenge and romance.

A promising medical student Kang Ma-ru (Song Joong-ki) has been in love all his life with his slightly older next-door neighbor Han Jae-hee (Park Si-yeon), a television reporter. He is an adoring boyfriend and she always considered Ma-ru her home. But when her situation takes a turn for the worse and Jae-hee becomes desperate to escape poverty, she meets a man who changes everything — a rich CEO who introduces her to a life of comfort. So she turns her back on Ma-ru, choosing money over love.

The brutal betrayal leaves Ma-ru fractured — not just angry, but a completely changed man. A few years later, Ma-ru is now 30 years old and works as a bartender and gigolo, no longer a "nice guy." He then meets Seo Eun-gi (Moon Chae-won), a young chaebol heiress who's being groomed to take over her father's conglomerate. Eun-gi is a cold and calculating, business-savvy, and raised by her father to never show emotion to anyone. But Ma-ru intrigues her, and she becomes curious and she can’t stop thinking about him.

Ma-ru decides to take advantage of her as a pawn in his plans for revenge. Eun-gi falls in love with him, not knowing that he’s using her to get back at his ex Jae-hee, Eun-gi's young, gold-digging stepmother. Just when Ma-ru is beginning to genuinely care for Eun-gi, she finds out the truth and they break up. But a car accident causes Eun-gi to lose her memory, and she enters Ma-ru's life again.