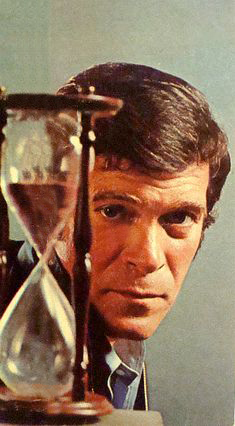 The Immortal was a short-lived 1969–70 TV show based on a series of stories by James E. Gunn, who also wrote the novelization. It was canceled mid-season by ABC, but has been reshown more recently by Syfy.

Ben Richards (Christopher George) is a race car driver who has special blood characteristics. He has every antibody to everything — cancer, old age, etc. — making him virtually immortal. After a wealthy, dying man named Jordan Braddock receives a blood transfusion from Richards, he realizes how much better he feels from it. But the effects of the transfusion wears off, so he'd need regular transfusions of Richard's blood, and must keep Richards alive in order to use him as a living blood bank. So, he sends out his henchmen to capture and imprison Richards, who escapes. After Braddock dies, one of his ex-henchmen, Fletcher, approaches another wealthy old man named Arthur Maitland, who hires Fletcher to capture Richards for himself.

So now Richards has to go on the run from Fletcher, plus there's another reason: He has a brother, and if his brother has the same extremely rare blood, he needs to be warned lest Maitland or another aging billionaire grab him instead.

This series is the mirror image of the Ben Gazzara series Run for Your Life; where Gazzara's character was traveling because he had a terminal disease and was dying, Richards has to run because, barring accidents, he will live forever, and so would anyone receiving regular transfusions from him.

Not to be confused with the later but equally short-lived year 2000 work, The Immortal, a Highlander clone starring Lorenzo Lamas.

Tropes used by this series include: