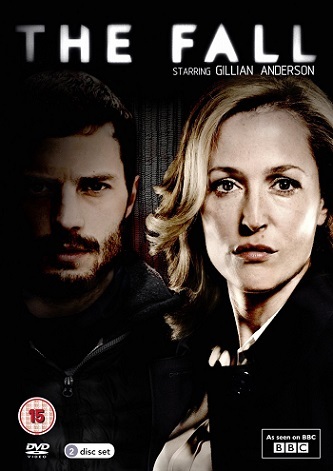 The Fall is a British crime drama series created by Allan Cubitt. The series revolves around the investigation of a string of murders in Belfast, Northern Ireland, and how the lives of the various people involved in it collide. The series stars Gillian Anderson as Stella Gibson, a senior police officer of the London Metropolitan Police, and Jamie Dornan as Paul Spector, the Serial Killer Stella's hunting as well as the Deuteragonist of the show.

After the Police Service of Northern Ireland (PSNI) is unable to close the case of a Serial Killer attacking young professional women in Belfast, Stella Gibson is sent in from London to take over the investigation as Detective Superintendent. Under her new leadership the local detectives race against time to track down and stop the killer before he can strike again, all while working against increasingly negative media scrutiny and the still-simmering tensions of The Troubles which constantly threaten to explode into full-on violence against the police. Meanwhile the Serial Killer they're hunting, bereavement counselor and seemingly mild-mannered Paul Spector, plans his next attack whilst juggling the demands of family life and the children he genuinely loves, his job and the domestic abuse case he has become dangerously emotionally invested in, increasing suspicion from his wife of his strange behavior, and the unwanted attentions of an underage babysitter.

Due to good reception, BBC has aired the show for two seasons with a third season having just ended. While Cubitt mentioned that Spector will appear in the third season for the last time, he and Anderson mentioned that they'd have no problems doing more seasons, in part to explore Stella Gibson's background.

A French remake was produced by TF 1 with the title Dans l'ombre du tueur (In the Shadow of the Killer), although the title changed to Insoupçonnable (Unsuspected). Production started in September 2016 and it aired in 2018.

It has no relation to the 1956 Albert Camus novel The Fall, the British post-punk band, the 2006 Tarsem Singh film or the 2014 video game.

The Fall provides examples of: