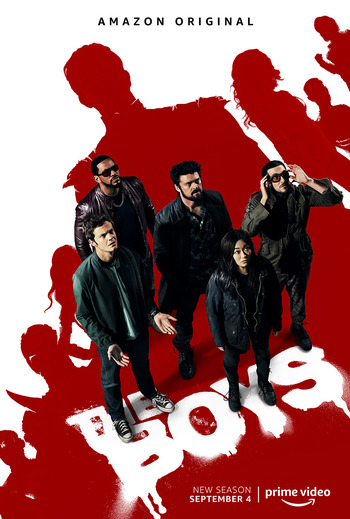 Get Some.note From left to right: Hughie, Mother's Milk, Billy Butcher, Kimiko and Frenchie. Silhouetted in the background: A-Train, Black Noir, Queen Maeve, Homelander, Starlight, The Deep, Stormfront
Butcher: Supes lose hundreds of people each year to collateral damage... There's a fuck-sight more that happens that just gets swept right under the rug.
Hughie: Why?
Butcher: Ain't it obvious? Movie tickets, merchandising, theme parks, video games. A multi-billion dollar global industry supported by corporate lobbyists and politicians on both sides. But the main reason that you won't hear about it is 'cause the public don't want to know about it. See, people love that cozy feeling Supes give them. Some golden cunt to swoop out of the sky and save the day so you don't got to do it yourself. But if you knew half the shit they get up to? Ooh... [clicks tongue] fuckin' diabolical. But then... that's where I come in.
Hughie: Come in to... to do what?
Butcher: Spank the bastards when they get out of line.
Advertisement:

The (other) deconstruction of the superhero genre.

The Boys is a television series airing on Prime Video and helmed by Eric Kripke of Supernatural fame, based on the Garth Ennis and Darick Robertson comic book of the same name. It premiered on July 26, 2019 and has completed airing its third season, which premiered on June 3, 2022. The series has been renewed for a fourth season.

The series takes place in a world where superhuman "Supes" are its own subset of celebrity culture, where they embrace all the darker aspects of having wealth and fame while enjoying the public view of them as paragons. The major caveat is that these super"heroes" are primarily a marketing tool exploited by Vought International, who go to extreme lengths to cover up their violence and decadence as they maximize profits. The story revolves around a group of vigilantes known loosely as "The Boys" who set out to take down corrupt superheroes with their blue-collar grit and willingness to fight dirty, all the while uncovering deeper secrets of Voughts' history.

In September 2020, it was announced that a spinoff was in development

, which will be set in a Vought-operated college for young adult supes who compete with one another for sponsorships and notoriety. Kripke later stated

that it would be loosely inspired by the G-Men of the comics, who in turn were based on Marvel's X-Men. The spinoff would eventually be officially greenlit in September 2021, titled The Boys Presents: Varsity and have filming start in May 2022 with a plan to wrap up by October. In July 2022, the title was changed

to Gen V. Another spinoff, an animated anthology titled The Boys: Diabolical, was announced in December 2021, consisting of eight episodes released on March 4, 2022, sometime before season three of the main series. Kripke has also expressed interest

The Boys contains examples of:

open/close all folders
A - F
G - L
M - R
S - Z
♫ If you wanna be my lover, you gotta get with my friends
Make it last forever, friendship never ends! ♫
Feedback

Example of:
Leave No Witnesses