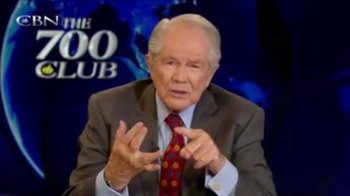 Pat Robertson, interrupting your young adult programming with wholesome Christian values.
Freeform is not responsible for what is about to appear on your screen.
Watch or don't watch. We're okay either way.
— A disclaimer before various broadcasts on Freeform.
Advertisement:

Long-running Christian TV show hosted by Pat Robertson, produced by the Christian Broadcasting Network, and shown in syndication as well as Freeform (the current form of what started out as CBN Satellite Service). Initially a run-of-the-mill show focusing on Christian testimonials and gospel performances, The 700 Club gradually evolved into a daily platform for Robertson's ultraconservative political commentary. It also has news reports from CBN News, mainly of topics of Christian interest. Robertson announced his retirement as host of the program on October 1, 2021, with his son Gordon tapped as the new host.