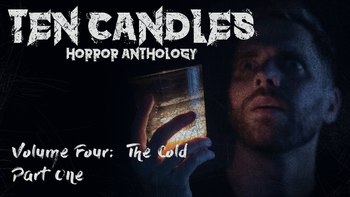 Roll The Intro...
Something has crashed through history, generating shockwaves across the timeline. Whether the 1800s, centuries from now, or anywhere in between, certain individuals across time seem to have a much larger role to play as a series of interconnected events spanning centuries seems to, somehow, have tied their fates together.

Ten Candles is a horror/mystery anthology series with an over-arching plotline and rotating guest spot that rewards careful observation and note-taking. The first series in The Phobos Saga, It quickly became one of the more popular series on the Hyper RPG Twitch channel, and eventually led to the Kids on Bikes Playtest and Kollok 1991, where it was revealed all three shows take place in an infinite spanning Multiverse.

, and the series is broken down into volumes, and with some exceptions, is usually three parts a piece. In each volume, there is no way to "win," the best you can do is outlast the GM until the last candle fizzles out.

Originally, there were supposed to be only Ten Volumes of Ten Candles; that changed when Zac Eubank and Malika Lim were to be married. To fill in the three weeks they were gone for their honeymoon, Markeia Mc.Carty GM'd her own Ten Candles Volume. While not in Zac Eubank's canon series, it has been said that it is "10 Candles Adjacent," inadvertently being a part of a multiverse before the reveal of the Phobos Saga was announced. Ten Candles: The Affected originally aired from June 4th 2018 to June 18th 2018 on Twitch between Ten Candles: The Cold and Ten Candles: Charley Chimp. The list of all episodes can be found on its recap page.

Tropes found in all volumes:

Tropes found in all volumes, created by Audience Participation: