"Would you like to talk about TV Tropes, or Kevin Bacon?" 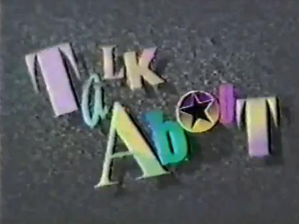 Canadian Game Show produced by CBC Vancouver (syndicated into the United States as well) where a pair of contestants chose one of two subjects to "talk about" and had 20 seconds each to rapidly explain the subject while trying to hit as many of the 10 keywords related to the subject as possible. Each word was worth a point, and getting all 10 awarded 10 points to the team and a bonus prize. But, if they did not hit all 10 words, the opposing team could steal the points by guessing the topic from the words that weren't revealed. The first team to 15 points became the champion.

The show ran briefly in America (1989-90), plus repeats a few years later on the USA Network and on Canadian GSN equivalent GameTV), but the format managed to go to a few other countries. Most notable is the United Kingdom, where Andrew O'Connor helmed a version of the show (re-titled TalkAbout) as a daytime fixture on ITV from 1990-93.

"Now, select another topic to talk about: Miraculous Ladybug, or Lionsgate?"