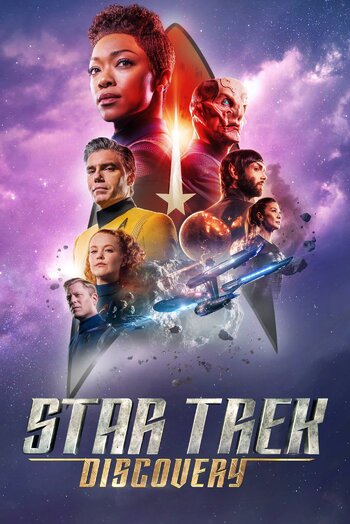 "We are creating a new way to fly."
"The real world doesn't always adhere to logic. Sometimes up is down. Sometimes down is up. And sometimes when you're lost... you're found."
— Michael Burnham
Advertisement:

Star Trek: Discovery is the sixth live-action Star Trek television series. It premiered on September 24th, 2017 and has been renewed for a fourth season. It was co-created by Bryan Fuller and Alex Kurtzman, with creative contributions by Nicholas Meyer; Kurtzman is the current co-showrunner with Michelle Paradise. Developed by CBS, Discovery airs in the United States on their streaming service Paramount+,note Originally named CBS All-Access. as well as in Canada on Space Channel and CraveTV. In other territories, the show's first three seasons were also broadcast to the rest of the world (bar Mainland China) on Netflix; the show exited Netflix in November 2021. It was previously announced that the series would not become available to international customers again until Paramount+ launches internationally in 2022, delaying the launch of season 4 in those regions. However, on November 24, 2021, in response to widespread fan outrage, Paramount announced that the program would release instead on November 26, 2021 in all markets in which the service is currently available. For those markets currently without the service, the episodes will instead premiere on the free ad-supported streaming service Pluto TV on the same timetable.

Each season is built around a season-long serialized Story Arc.

The first season was released from September 2017 to February 2018, and the second season from January to April 2019. Additionally, four "Short Treks" — fifteen-minute-long episodes — were released leading up to the beginning of season 2. The third season was released from October 2020 to January 2021, and shortly after the third season premiere a fourth season was ordered, which premiered on November 18, 2021. In the lead-up to the third season, the first season began broadcasting on CBS in September 2020; it is unknown if later seasons will follow in making the jump to broadcast.

A Spinoff, called Star Trek: Strange New Worlds, was announced in May 2020 and premiered 2 years later. It centers around Pike, Number One and Spock, played by Mount, Romijn and Peck, and their adventures aboard the U.S.S. Enterprise in the years preceding James Kirk's tenure as captain. Announced even earlier than this was a show starring Michelle Yeoh's Phillipa Georgiou and concerning Section 31, but it was put into Development Hell with the intention of rescuing it once one of the other shows of the Secret Hideout era (DSC, SNW, Star Trek: Picard, Star Trek: Lower Decks, Star Trek: Prodigy) completes its run.

open/close all folders
A - D
E - H
I - Q
R - Z
"We are stranded in a cruel, anarchic world. But we are still Starfleet."
Feedback