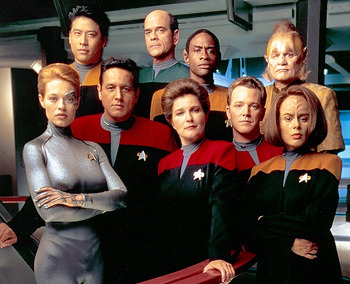 The crew of the U.S.S. Voyager, NCC-74656.note Clockwise from top left: Harry Kim, The Doctor, Tuvok, Neelix, B'Elanna Torres, Tom Paris, Kathryn Janeway, Chakotay, and Seven of Nine. Kes is holding the camera.
"There are three things to remember about being a starship captain. Keep your shirt tucked in, go down with the ship, and never abandon a member of your crew."
— Captain Kathryn Janeway

Star Trek: Voyager is the third "Next Generation" Star Trek series, running for seven seasons from January 1995 through May 2001.

The double-length pilot episode saw the USS Voyager, under the command of Captain Kathryn Janeway, called in to apprehend a paramilitary group led by Chakotay, a renegade Starfleet officer. In the midst of trying to locate him, Voyager was yanked across the galaxy by an alien known as the Caretaker, who was also responsible for abducting Chakotay's ship. During a battle with the Kazon, the local space-faring thugs, Janeway destroyed the device that had abducted them rather than let it be misused. This had the effect of now stranding both crews in the Delta Quadrant, on the other side of the galaxy, seventy-five years' travel time from home.

For the next seven seasons, Voyager looked for a shortcut back to Earth while dodging or battling an assortment of nogoodniks within the Delta region. For the sake of familiarity, they also crossed swords with a pair of Ferengi who had been zapped to the Delta Quadrant back in Next Generation, the Q Continuum, assorted Romulans and Cardassians, a diaspora of Klingons on a pilgrimage of sorts, and even a rogue Starfleet vessel which was also kidnapped by the Caretaker. To make matters worse, the Delta Quadrant happens to be the home of the Borg Collective.

The show had a high turnover of both writers and actors. Season One offered up a promising mish-mash of crewmen with sketchier backgrounds than those of TOS or TNG, with pasts as rebels, convicts, con men, or (later) Borg drones. By Season Three, the show was retooled into something more suitable for family viewing, and the producers had found a winning formula (in keeping with the late-nineties fantasy TV boom) in embracing the sillier aspects of Starfleet life.

To an even greater extent than Star Trek: Deep Space Nine, Voyager very much represented an Actionized Sequel for the Trek franchise. This was aided in large part by the Delta Quadrant being seemingly the most savage of the four Quadrants; nearly every race the Voyager Crew meet is as xenophobic as they are powerful. The series also toyed with improved CGI effects and a couple of two-part telemovies featuring the Borg.

The first Star Trek: Elite Force PC game takes place during this show, and the actors provide their voices for their counterparts (barring Jeri Ryan as Seven of Nine, until an expansion pack including her was released).

Star Trek: Picard serves as a sequel series, with Jeri Ryan reprising the role of Seven of Nine. The Show Within a Show The Adventures of Captain Proton has its own work page.

When the highly Genre Savvy doctor of "Star Trek: Voyager" has a daydream in which the ladies of Voyager fight for his affections, he makes sure to score it with a theme complete with a recurring sexophone riff.

When the highly Genre Savvy doctor of "Star Trek: Voyager" has a daydream in which the ladies of Voyager fight for his affections, he makes sure to score it with a theme complete with a recurring sexophone riff.