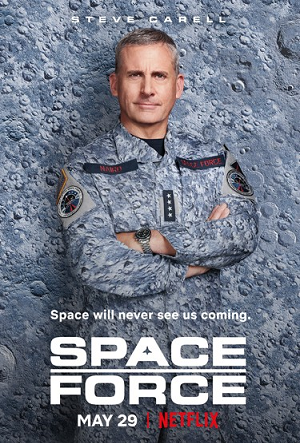 "It was a very successful mission ordered by POTUS himself which proved assault rifles will work in the vacuum of space."
— General Naird
Advertisement:

Space Force is a workplace comedy series from Greg Daniels (The Office (US)) that centers on a group of people tasked with establishing the sixth branch of the United States Armed Forces, the United States Space Force. Mark Naird (Steve Carell) is the eccentric general in charge of the effort and the series follows his collaboration to get "boots on the moon" per the orders of the President, frequently clashing with the scientific curiosity and pacifism of his head scientist Adrian Mallory (John Malkovich). Along for the ride are snarky scientist Chan Kaifang (Jimmy O. Yang), social media director Tony "Fuck Tony" Scarapiducci (Ben Schwartz), pilot Angela Ali (Tawny Newsome) and Mark's daughter, Erin (Diana Silvers).

Not to be confused with Space Force (2018) by Jeremy Robinson.