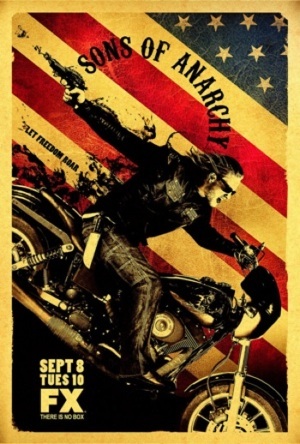 Gotta live this life...till you die.
"The concept was pure, simple, true, it inspired me, lit a rebellious fire, but ultimately I learned the lesson that Goldman, Prudot and the others learned; that true freedom requires sacrifice and pain. Most human beings only think they want freedom. In truth they yearn for the bondage of social order, rigid laws, materialism; the only freedom man really wants, is the freedom to be comfortable."
— John Teller
Advertisement:

Sons of Anarchy is a television drama series from the FX network; it was created by former The Shield writer Kurt Sutter. The series, which can be described as "Hamlet meets the Hells Angels", focuses on the criminal exploits of the Sons of Anarchy motorcycle club in the northern California town of Charming.

The Sons of Anarchy Motorcycle Club, Redwood Original (SAMCRO, Sam Crow, the Sons, or just Sons of Anarchy) is a motorcycle club that sells guns to various gangs, all the while protecting the town, in order to preserve Charming as a small town unmolested by big corporations, chain stores, and other corrupt aspects of upper-class suburbia. The main character is Jackson "Jax" Teller, son of deceased founder John Teller and step-son of the current leader of the group, Clay Morrow. The series begins with Jax entering fatherhood as his ex-wife gives birth to their first-born son, while at the same time discovering a manifesto his father wrote prior to his death in which he decries how his anarchist biker club became an organized crime syndicate that was the very thing that he was rebelling against when he conceived of the club.

The manifesto inspires Jax to try and steer the club towards his father's original vision by attempting to move the club away from organized crime. Needless to say, this does not go over well with the Faux Affably Evil Clay or his Affably Evil mother Gemma; the show implies that they had Jax's father murdered when he began "going soft" on them.

Like The Shield, Sons has a rich supporting cast of characters balancing out the Hamlet-esque drama; other bikers include Bobby Munson (a bookmaker/Elvis impersonator by day and a biker by night), Tig Trager (Clay's right-hand man and chief enforcer who has some bizarre sexual habits), Opie Winston (Jax's best friend, whose interests are also split between the club and his family), Opie's father Piney (who founded the club along with John Teller), Juice Ortiz (a Hispanic computer geek from Queens), Chibs Telford (a Scottish former Army medic and one-time member of the IRA), and Happy Lowman (a ruthless triggerman for the club).

On the civilian side, there is Tara Knowles (a doctor who was Jax's childhood sweetheart, who serves as the chief threat to Gemma's control over her son), corrupt Police Chief Wayne Unser, the straight-as-an-arrow deputy (and potential successor) David Hale, his brother Jacob Hale, a prominent member of the community who has his eye on profiting from the town, and a number of law enforcement agents as the show progresses.

While the show borrows heavily from Hamlet, much of the drama comes from the gang's criminal exploits and the Faustian implications of SAMCRO's presence within Charming. This has led to both the wealthier elements of the town to make their own (even worse) Faustian pacts, such as bringing in white supremacists into Charming (see Season Two) to destroy SAMCRO by any means necessary, and the club in turn making more and more desperate decisions to survive.

“Doubt thou the stars are fire,
Doubt that the sun doth move,
Doubt truth to be a liar,
But never doubt I love."
-William Shakespeare