Series / Siskel & Ebert
aka: At The Movies 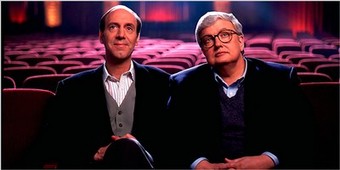 "That's next week, and until then, the balcony is closed."
Advertisement:

Siskel & Ebert and the Movies (usually just called Siskel & Ebert) was a syndicated American television series that ran from 1986 to 1999, spun off from an earlier show on PBS: Opening Soon at a Theater Near You/Sneak Previews (1975 to 1982), as well as the syndicated At the Movies (1982 to 1986), both of which utilized a similar format of two critics, Gene Siskel of the Chicago Tribune and Roger Ebert of the Chicago Sun-Times, discussing and debating the week's new films. Roughly four or five films were critiqued per episode. It usually ended with a special segment like "Video/Laserdisc Pick of the Week/Month", an interview with a celebrity or director, or a short-lived segment where viewers wrote in to provide a second opinion or correct S&E about something. The show taped at ABC's Chicago station, WLS-TV, which is also where The Oprah Winfrey Show initially taped as well.

Occasionally, they would devote an entire episode to one issue in film: Their stance against colorization, against fullscreen cropping of widescreen films (and vice versa when it came to older Disney animated films), trends they noticed in film (such as directors influenced by Quentin Tarantino) and spotlights on whom they considered rising stars or directors. They even spent an entire episode analyzing who had the better filmography: Woody Allen or Mel Brooks? Most notable, however, were the annual "Memo to the Academy" (where Siskel and Ebert recommend what they think should be nominated for Oscars) and the "Best of" and "Worst of" the year lists, the latter of which were quite entertaining as they got to trash the bad films one last time. An annual hour-long special, hosted before a studio audience at a Disney resort, was devoted to "If We Picked the Winners," in which the critics discussed who they would pick for the upcoming Oscars if they were members of the Academy.

Siskel and Ebert's claim to fame was their method of reviewing movies, ultimately boiling down to a simple thumbs up or downnote a simple "yes" or "no" vote, respectively, during the PBS years. There was no middle ground, so it was interesting seeing them rationalize choosing either one or the other. And of course, when you have two major film critics from rival newspapers together, disagreements could occur. And the debates were some of the most fun moments in the show. Heck, sometimes the two would bicker on some small detail even if they both agreed on the film's merit!

Unfortunately, in early 1998, Gene Siskel was absent for a few weeks due to getting surgery for a brain tumor. Despite this, he was still able to phone in his reviews (literally!) and debate with Roger via a split screen and a still image of his face on one side. When Siskel returned, he was noticeably less animated and expressive, talking slower, and seemed to debate with Roger less. Nevertheless, he stuck with the show until early 1999 when he went back into surgery and, sadly, never came out. Gene Siskel died on February 20, 1999, and while the show continued under a few different banners and with different critics (Roger Ebert & the Movies, Ebert & Roeper, At the Movies), the Siskel & Ebert show was finished. Roger Ebert devoted an entire episode to Gene Siskel following his death, and it's clear that even though the two frequently disagreed, they didn't hate each other.

Ebert continued the show, first as Roger Ebert & the Movies with guest cohosts, and then as At the Movies with Ebert and Roeper with the addition of his Sun-Times colleague Richard Roeper. Ebert stopped appearing on the show in 2006 because he lost the ability to speak due to his cancer and Roeper continued with guests until the two were removed from the show by their distributor, Disney-ABC Domestic Television, in 2008. They were replaced by Ben Lyons (son of film critic Jeffery Lyons) and film critic and Turner Classic Movies presenter Ben Mankiewicz (now part of The Young Turks' What the Flick?!

) in a move to skew to younger audience. While most of the old fanbase of the show had no problem with Ben Mankiewicz, almost all of them (and Ebert himself) took issue with Ben Lyons' skill, ethics, and taste. The two Bens were fired from the show a little over a year later. The critics were replaced one final time with critic A.O. Scott (critic for the New York Times) and Michael Phillips (of Siskel's Chicago Tribune), choices Ebert expressed satisfaction with, despite no longer being associated with the show. However, these two hosts only lasted from August 2009 to March 2010, when Disney-ABC simply pulled the plug on the show, ending the Siskel & Ebert TV legacy for good.

... Or so we thought. Later in 2010, Ebert announced he had purchased the rights to the show and had taken it back to PBS. His new Ebert Presents: At the Movies began airing in January 2011, with Ignatiy Vishnevetsky of Mubi (who now writes for The Onion's AV Club) and Christy Lemire of the Associated Press (as with Mankiewicz, now a part of What the Flick?!) as the new critics. Ebert himself made appearances on the show, with Bill Curtis narrating his recent written reviews, as well as occasional narrations by Werner Herzog. The show was a ratings success, but due to funding problems it went on permanent hiatus at the end of 2011. Ebert died of cancer on April 4, 2013.

"These tropes receive two thumbs up":

This show discusses examples of: