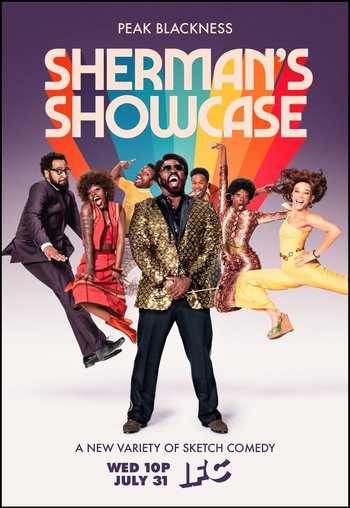 The star is actually the man in the rear to the far left.
Advertisement:

Sherman's Showcase is an adult comedy series airing on IFC that was created by Comedian Bashir Salahuddin with the help of musician Diallo Riddle.

The heavily serialized anthology series follows the Show Within a Show Within a Show, a parody of Soul Train, Solid Gold, Midnight Special, Solid Bronze, and other American music/variety series. It's host, Sherman McDaniels, guides segments with a big personality, as he does his best to both exhibit top, usually African-American acts through the decades, starting on July 1st, 1972.

I'll fill in links as I go along. I am doing the best I can here, while trying not to let the Funk Monster (edit lock) catch me.