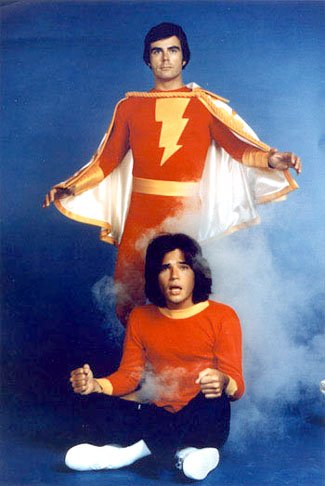 Captain Marvel and his alter ego Billy Batson, keeping it real in The '70s.
"Chosen from among all others by the Immortal Elders — Solomon, Hercules, Atlas, Zeus, Achilles, Mercury — Billy Batson and his mentor travel the highways and byways of the land on a never-ending mission: to right wrongs, to develop understanding, and to seek justice for all! In time of dire need, young Billy has been granted the power by the Immortals to summon awesome forces at the utterance of a single word!"
—Opening Narration
Advertisement:

Based upon the Fawcett/DC comic book character Captain Marvel, Shazam! was Filmation's first foray into live-action children's programming in The '70s. The program ran three seasons on CBS and was considered successful enough to launch a spin-off, Isis.

It's probably noteworthy that Filmation also produced The Kid Super Power Hour, which featured animated adventures of Captain Marvel (not a continuation of this series, although it did keep the show's theme music as the Marvel Family's Leitmotif) as well as the extended Marvel family.

The character of Captain Marvel is also the main hero of a 1941 Film Serial, and a 2019 movie.