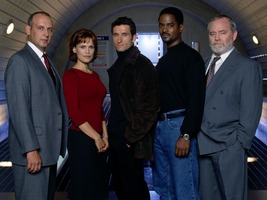 "Ever wish you could live the last week all over again? My name's Frank B. Parker and I do it all the time. I work for a secret government project experimenting with time travel. When things really get screwed up, I'm the guinea pig they send back to take care of it. Catch is, I can only go back seven days."
Advertisement:

Science Fiction Time Travel series which aired on UPN from 1998-2001.

Using technology salvaged from the Roswell crash, a secret NSA project has developed "The Sphere", a time machine capable of carrying its pilot back in time exactly seven days.

The trouble is, the "backstep" process is extremely painful, and if the pilot passes out and loses control of the Sphere he'll end up in space or underground — and in their search for a pilot with a high enough pain threshold, the best candidate is psychotic Gulf War veteran Frank Parker.

Due to the limitations of their alien fuel supply, backsteps are reserved for cases where massive disasters can be averted (Frank's first mission is to prevent a terrorist cell from detonating a stolen nuclear weapon in Washington, D.C.).

Though it would seem that most of the time, Frank's missions should entail nothing more than a well-timed phone call, this rarely turned out to be the case. Typically, the situation would either prove more complex than the backstep team had previously believed, time would be short (often, political or intelligence-gathering factors would delay the backstep until about 6 days 23 hours after the disaster of the week), or Frank would just decide to solve the problem himself for no good reason (but then, he was insane).

While most shows divert from their "normal" premise to explore ways in which the underlying technology can go wrong only occasionally, Seven Days ended up relying on this device approximately every other episode. Over the course of the series, Sphere malfunctions had various effects including:

Also, all life on Earth was wiped out at least three times, once by the Cure for Cancer.

Main characters would also die in almost every episode, either as a major part of the plot or as an afterthought (all life on Earth is wiped out including all of the main characters); their deaths would always be fixed by a Backstep, of course, but it was still somewhat jarring to see a show repeatedly kill its entire cast!

Despite its reliance on both a Disaster of the Week and phlebotinum breakdown, Seven Days is noteworthy in that it was not formulaic structurally. While most episodes began with a Columbo-style setup showing how the disaster of the week came to pass, what followed varied substantially. Sometimes, the backstep would occur immediately, followed by an investigation in the past. Other times, the investigation would come first, with the backstep put off until the final scene. Sometimes they would do both. And, of course, how the prevention of the disaster was related to the Sphere malfunction-of-the-week varied greatly as well. In quite a few episodes, Parker's official mission was secondary to his own personal goals in a backstep (Typically, saving a friend from a personal tragedy, or simply escaping from his confinement on the base).

Though they never went so far as Quantum Leap in this regard, there are occasional hints that some form of God takes active offense at their tampering in his domain. Parker's life is often spared by divine intervention — for example, an unexpected thunderstorm that puts out the fire in which he'd just incinerated the Antichrist. How this fits in with the fact that voodoo priests on the show can perform actual magic is unclear.

Arguably this is was one of UPN's more successful shows, managing to run for three seasons and only surpassed by its fellow sci-fi series, Star Trek: Voyager.