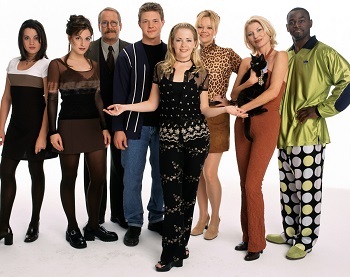 That Sabrina character certainly gets around, doesn't she?

Sabrina the Teenage Witch is a live-action sitcom based on the Archie comic book by Dan DeCarlo and George Gladir. It was created by Nell Scovell, who also served as the showrunner.

On her 16th birthday, Sabrina Spellman (Melissa Joan Hart), resident of Westbridge, Massachusetts, discovers that she is a witch and has magical powers. She moves in with her witch aunts Hilda (Beth Broderick) and Zelda (Caroline Rhea), and learns to survive the pratfalls of high school with a little magic on her side. Other fixtures in her life were her talking cat Salem (a warlock punished for his megalomania by being trapped in an animal body, voiced by Nick Bakay), her oblivious love interest Harvey Kinkel (Nate Richert), and her mortal enemy Libby Chissler (Jenna Leigh Green).

Sabrina the Teenage Witch began with a Pilot Movie set in an Alternate Continuity that aired on Showtime on April 7, 1996, and premiered on ABC's TGIF line-up on September 27, 1996. The series switched to The WB with its fifth season premiere on September 22, 2000, and aired for two more seasons on that network before it concluded on April 24, 2003. It was the most successful series from Viacom Productions that did not involve either Fred Silverman or Dean Hargrove, the engineers of the longer-lasting Matlock, Diagnosis: Murder, and the series of Perry Mason telefilms from 1985-95. This was even more remarklable considering Viacom Productions had become a subsidiary of Paramount Television before the series began, and the series had more seasons (4) on ABC than any show from the main Paramount banner within the 1990s; MacGyver, the last series in Paramount's string of hits on ABC that started in 1969, ended its run after seven seasons in 1992, with only all or part of 3 seasons airing in the 1990s.

The show was extremely similar in characterization and plot-structure to Out of This World (1987), but was in fact based on material which predated that show by several decades: the same Archie Comics as the series Sabrina and The Groovie Goolies — though the animated show went in a very different direction. There were also two additional TV movies, Sabrina Goes to Rome and Sabrina Down Under featuring Tara Strong in a very rare live action role as a movie-exclusive character Gwen.

Notable for its frequent guest stars, including Britney Spears, Avril Lavigne, Tara Lipinski, Daniel Bedingfield, *NSYNC, Usher, Backstreet Boys, Johnny Mathis, Dick Van Dyke, and Barbara Eden. While the show was airing, it received an Animated Adaptation in Sabrina: The Animated Series - produced by DIC Entertainment, this time with Melissa Joan Hart voicing the two aunts and her sister Emily Hart (who had a recurring role on the sitcom as Sabrina's bratty cousin Amanda) voicing Sabrina. There were also several novelizations, some of which tended to be more action-packed and adventure themed. Salem also received his own series of books where he would get into his own adventures.